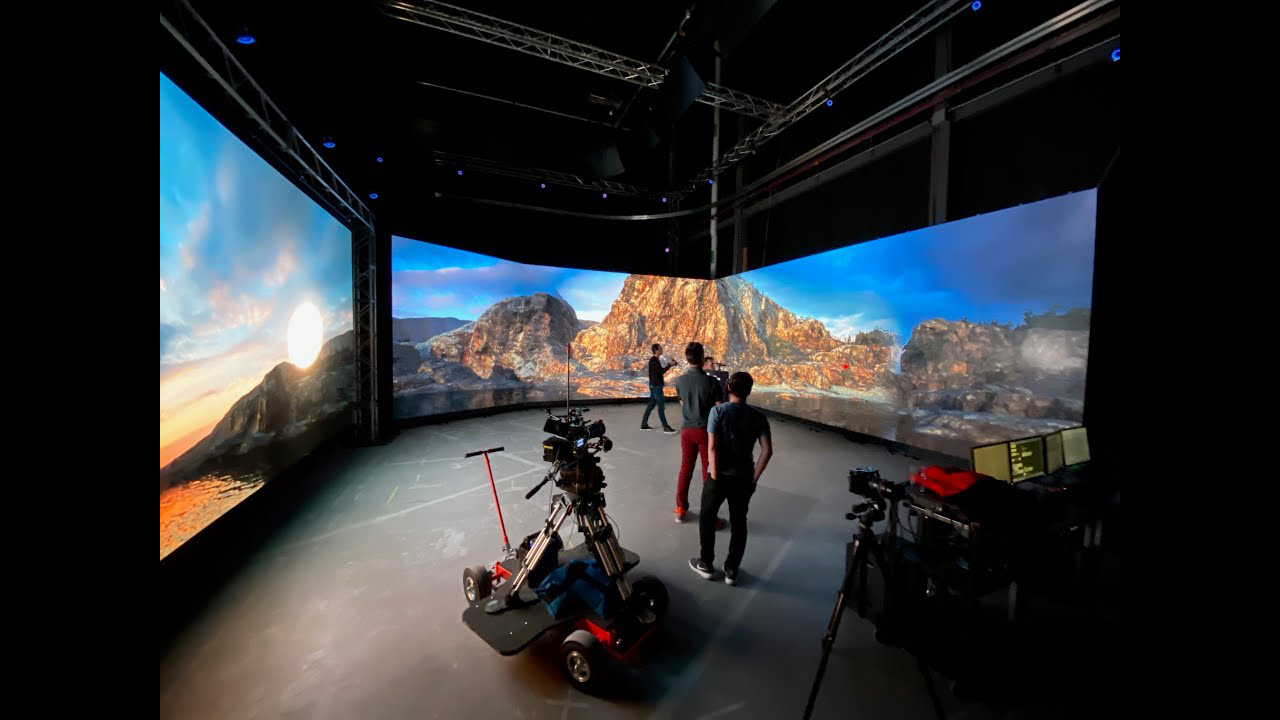 Take a back seat and imagine having access to the film or a production set that you can make the golden stay for days, change the surrounding weather, move the background, scout for different locations around the globe, and watch the VFX creatures interacting with actors without leaving the place. Can you imagine projecting all this in real? Well, as it turns out, the virtual production LED wall is turning this dream into reality – isn’t that fascinating?

So, are you ready to know more about it?

What Is The Extended Reality?

Extended reality is a common term in the high-tech world as it’s the general term for VR, MR, and AR. It has a combination of virtual and real environments while creating human-to-machine interactions with the implication of computer technology.

Having that said, XR extended reality is revolutionizing the way content creation and storytelling are being executed, and the LED screen wall is just a cherry on top. However, in the further article, we share how extended reality works associated with virtual production LED walls.

Virtual production is defined as a suite of multiple software tools that empower the studios to integrate computer graphics and live-action footage on a real-time basis. The contributors from different locations can develop and render digital environments while the cast members keep working on the set.

That being said, the visual effects aren’t only about post-production anymore. It includes the creation of a virtual scene with the help of a game engine in association with actors and physical props with the help of an LED wall.

Whenever the camera moves, the virtual environment from the LED wall will shift the perspectives with the help of gaming technologies for navigating around. The unified movement of imagery and camera creates the illusion of a reallocation. In addition, the live camera tracks the camera movements through a rendering platform where they are transformed in real-time.

Many people confuse virtual production and traditional production, but they have differences in the whole process. Here are they:

The chroma-key stage is imagined, created, and approved with virtual production before the camera is rolled with pre-production, preparation meetings, and pre-vis (short for  previsualization). On the contrary, traditional production revolves around creating a pre-vis environment from the concept art and is scheduled for conclusion after and during the principal photography.

When it comes down to scene-setting, virtual production depends on the computing environment. If the computing is on-point, the entire scene sitting process will be streamlined with a few minutes, depending on the complexity. On the other hand, scene-setting in traditional production demands the team to work on the shots and storyboards, the camera needs to be lined up, and the actors need to be blocked, making it a more complicated process.

With virtual production, the post-production process is streamlined and rather predictable, eliminating the need for “fix it in the post” era. On the contrary, we already know how much revisions traditional production demands and cannot be predicted.

Save Time And Cost

Virtual production LED walls can not only save time by taking things virtually, but they also help save costs. For instance, it eliminates traveling time and additional costs. Also, the revisions and decisions are more creative and are conducted in earlier phases to ensure correct production decisions are being made.

With the  help of virtual production LED walls, everyone involved in the production process will have an in-depth understanding of pre-vis to post-production. In addition, the LED walls, green screens, and virtual cameras can show what’s being captured, so everything is fully visible.

Speed Up The Shooting Process

Virtual production LED walls allow the teams to speed up the production and shooting process without any interruptions. Also, virtual production involves changing the digital assets quickly, resulting in several shots in a limited timeframe. Not to forget, the producers allow control over lighting, weather, object placement, and time.

Break The Time And Regional Restrictions

Virtual production can be completed through decentralized teams without any time and regional restrictions. In addition, the producers can create a team of specialists and creative, irrespective of the location, without increasing the costs!

High color reproduction and low brightness can enhance the sense of hierarchy and vividness. It helps to cope with the full tracking and shooting of the camera to ensure that the captured clear image display details without omissions.

Since the camera is shooting at various angles, the ultra-wide viewing angle of an LED wall can ensure that the display screen quality will not be lost because of the angle changes.

A high refresh rate ensures that the screen surface does not appear in any reflected light spot.

The brightness adjustment function of the LED wall helps to adapt to the different environment brightness in the virtual studio site to have better display performance.

Ultra-low latency of the LED wall ensures the playback content is displayed synchronously. The real-time monitoring function can control remotely, which helps to feedback and solve problems in time, making sure the normal filming.

Get Your Hands On LED Wall From iDisplay

Virtual production is the ultimate future of film-making, and LED walls will only accentuate the results. Having that said, iDisplay is offering LED walls to help you create the best productions through virtual assets. The LED walls from iDisplay not only can meet the need of virtual production but also have the following benefits which suitable for widely commercial uses:

As a professional commercial LED display board solution provider, iDisplay not only has the virtual production LED wall, but also commits to designing and manufacturing various kinds of LED displays in ODM and OEM for more than 20 years. So, if you need any quality LED displays, please feel free to contact us!